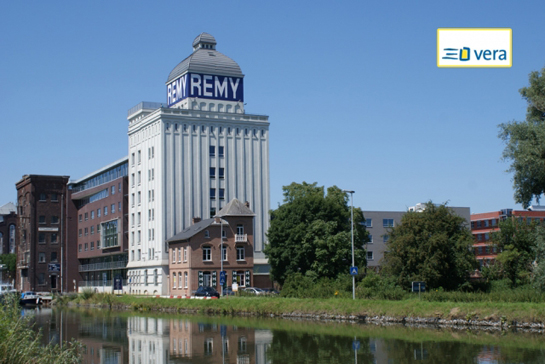 The autonomous provincial company VERA has acquired through the intermediation of Aximas the ground floor of building A, about 310 m² and 7 inside parkings

A first government company will come to Campus Remy. The exceptional environment of Campus Remy and the unconventional office building suits this young and flashy company perfectly.

Campus Remy is a unique project of Immo De Meyer (BAM Group) alongside the Leuven canal and next to the Wijgmaal train station. It consists of a renovated tower silo and 2 new office buildings attached to it, of which already one has been completed. Only a few floors remain for rent or for sale.VERA is an independent provincial company founded in 2000 by the provincial authority of Vlaams-Brabant with principal task to help the communes and cities with modernization, networking and e-government. VERA has a mission to develop a modern network on which all local authorities can voluntarily connect and for which the equipment is made available by the province. VERA has to take the imitative to make of the province a digital region and has a young funky team to do get the job done.Currently are 116 communes, OCMW divisions, 18 police zonings and 1 inter-communal company connected to the VERA network, approximately 87% of the public government in the province.